Cascada won the German final Unser Song für Malmö with the song Glorious.
The cdsingle is already out in Germany. It has two versions of Glorious:
Glorious - video edit
Glorious - extended mix
out on Zeitgeist / Universal (0602537295883)
The same two tracks can be found on the French cdsingle (Happy Music HAP 420-2)

A Swedish promo cd on the Catchy Tunes label has four versions:

Best Of Cascada
A Greatest Hits album is out on March 29. The 17 track release The Best Of Cascada  includes Glorious (Video edit) and Glorious (Acoustic version).
(Zoo digital / Universal).

Cascada and Robin
On November 1 Cascada released an album with acoustic tracks titled Acoustic Sessions.
It includes the acoustic version of her own entry Glorious but also a duet with Robin Stjernberg's of his entry You. (Zooland records)
The album is out now through Amazon, iTunes, CD expected November 2nd. 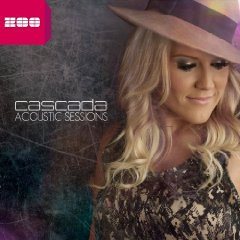 South African singer Colé van Dais teamed up with Lia Chabane and recorded a coverversion in Afrikaans and Tsonga. It can be found on the 2018 album Colé and Friends.

Who Is Cascada Band?
Even though we only get the singer on the record sleeces, Cascada is a trio. Singer Nathalie Horler, DJ Manian and Yan Peifer. They have been making dance music for almost a decade and have an impressive list of international hits on their name.
Debut single Miracle (2004) was already a hit in many countries, including #1 in France a top 10 hit in the U.K..
Everytime We Touch (2005) did eveb better and got Cascada in the US top 10. After a few more decent hits they released Evacuate The Dancefloor in 2007. This became their biggest hit to date, even going #1 in the U.K.. The band continued to do well in the German speaking countries, but now it's up to Glorious to get Cascada back on the world map.
Cascada have released five albums including 2012's Christmas collection It's Christmas Time.

Unser Song für Malmö releases
You can still listen to the songs participating in the German selection for Malmö.
Here is a list of contestants, if you go to each individual page you can listen to the song.
Many of the songs are released on cdsingle, CD album and of course through digital sources.
Most cdsingles are now available at BeaRecords

For a detailed list of the cdsingle releases of the German contenders (nine are released on cdsingle) please check our facebook article of 11-2.