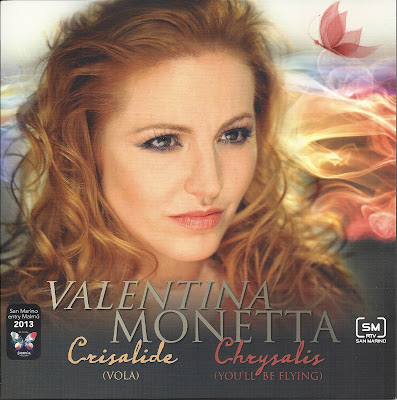 And again it's a song by Ralph Siegel, this time with lyrics (in Italian) by Mauro Balestri. The song is titled Crisalide (Vola) (Chrysalis ((it) flies)), nicely tying in with the butterfly theme / logo SVT have created for the 2013 contest.

The song and video was premiered on March 15. Watch and listen here at Valentina's Youtube.
iTunes and other sources have the Italian version and karaoke already for sale. 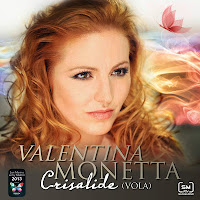 The song has also been released in English as Chrysalis (You'll Be Flying). The English lyrics are by Mauro Balestri and Jim Leary.
Check out the digital 4 track release here at Amazon. and iTunes

A promo cds in an 8 inch fold out sleeve has been issued.
It has both the Italian and English version plus their karaokes.
The disc also has both videos, photos and info (needs adobe reader) (Jupiter / Sony Music)

Remixes have now been released on iTunes.
The 8 track digital releases includes the ESC version, Radio Pop Version, Radio Jazz and Dance version of the Italian and the English version.
Update: The same 8 tracks (original, English and six remixes) have also been released on a promo cdsingle (Jupiter/Eurosong records) 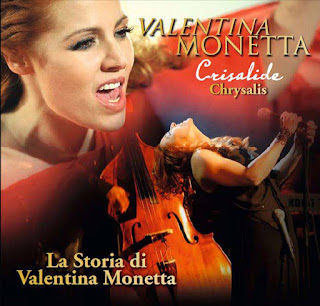 * I'll Follow The Sunshine is a coverversion of a song from the Malta Song semi final in 2011. It's (also) written by Ralph Siegel but didn't make it to the Maltese final.

Valentina entered last year in Baku with the much talked about Social Network Song, but failed to qualify. That song was also written by Eurovision veteran Ralph Siegel (with Tom Terrific and José Rodrigues).
Update: It is also highly likely that we'll see Valentina Monetta on 2014, as a pre-announcement was made that she and Siegel will team up again for the contest in Denmark.
Fact fans: Every artist with three consecutive Eurovision participations has won one of them. Lys Assia (Switzerland 1956-1958) won on her first try, Corry Brokken on her second (Netherlands 1956-1958) and Udo Jürgens on his third (Austria 1964 - 1966).


Ralph Siegel
For composer Ralph Siegel it's his 21st Eurovision entry. He co-wrote 12 entries for Germany, three for Luxembourg and one for Switzerland, Montenegro and now the 2nd for San Marino.
His best result is of course Ein Bisschen Frieden by Nicole penned with Bernd Meinunger, the winner of the 1982 contest and a #1 hit in many European countries.
Other highlights are Dschinghis Khan by Dschinghis Khan (4th in 1979), Theater by Katja Ebstein (2nd in 1980), Johnny Blue by Lena Valaitis (2nd in 1981), Lass Die Sonne In Dein Herz by Wind (2nd in 1987) and Wir Geben 'Ne Party by Mekado (3rd in 1994). 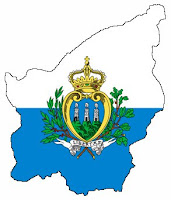 Links and sources:
SMTV Eurovision news in Italian and English
Valentina Monetta website and FB
Thanks to Jean-François.
Special thanks to Jupiter Records
Thanks to STHLM MIX