Eyþór Ingi (Eyþór Ingi Gunnlaugsson) won the Icelandic final with the song Ég á Líf (My life) written by Örlygur Smári and Pétur Örn Guðmundsson.
Update: A new version has been recorded. The song will remain in Icelandic for the contest.
It's the first time since 1997 that the Icelandic entry is performed in Icelandic. 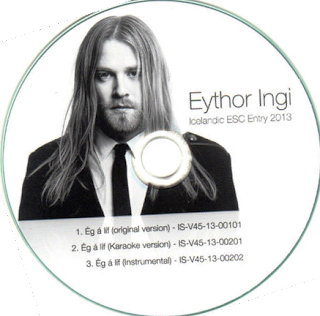 1989 born Eyþór Ingi has released a few digital singles and several tracks on various artists compilation.
His 'interesting' hairstyle is probably a remainder of the time he played Jesus in the Icelandic adaptation of Jesus Christ Superstar.
He also played in (no pun intended) Hair  (Berger), the Rocky Horror show (Riff Raff) and most recently in Les Miserables.(Marius)

Ég á Líf - The Malmö Album
A digital album with eight tracks is released. It includes four versions of the Eurovision track and four other tracks (including three with Todmobile.
Todmobile have been going since 1988 (before Eythor was born actually), but our Eythor recently joined them as their new lead singer.
The album is available through the likes of Tónlist, iTunes and Amazon and what have you.

Eyþór Ingi is currently working on a full solo album with a new single expected in August. 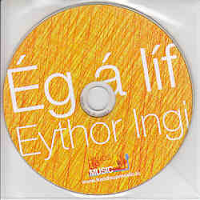 A 1 track promo with a different in yellow print has the A.K.A. Club mix.


the songsmiths:
For Örlygur Smári, also known as Öggi, Ég á Líf is the 4th Eurovision song. His previous entries were
2000 Tell Me - August and Telma (12th)
- written with Sigurður Örn Jónsson (a.k.a. Siggi), the icelandic original was titled Hvert Sem Er.
2008 This Is My Life - Eurobandið (14th)
- Written with Paul Oscar and Peter Fenner, the original Icelandic version was titled Fullkomið Líf.
2010 Je Ne Sais Quoi - Hera Björk (19th)
- Written with Hera Björk, no Icelandic version was recorded. Find out more here.
plus a number of national final songs.
Pétur Örn Guðmundsson participated as a singer in the 2011 Söngvakeppni with the song Elisabeth. He was a backing singer the 2008 and 2010 entries. 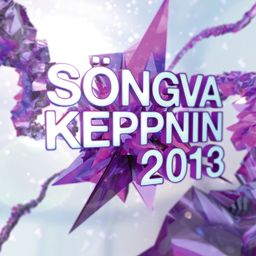 Söngvakeppnin 2013
RÚV have uploaded the songs for Söngvakeppnin 2013.
You can still listen here to the 12 contenders that were in the race for the ticket to Malmö.
The songs are all in Icelandic for the national selection.

The digital collection of 12 songs is available at Tonlist and other digital sources.
The CD with all songs is also out now.

There was one Eurovision star among the final-fold: Brigitta Haukdal. She opened the 2003 contest with Open Your Heart (and fab too) and ended 8th in Riga.
Her 2013 song Meðal Andanna is co-written by Jonas Gladnikoff who co-gave us the brilliant Et Cetera (Ireland 2009) and also Ireland 2010.
Yohanna, who did so well in 2009, also entered but didn't make it past the first round heats in Iceland.