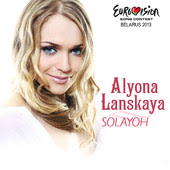 Rhythm Of Love by Alyona Lanskaya  (Алёна Ланская) won the Belorussian selection on December 7 2012. But in true Belorussian fashion a new song has been chosen.
Solayoh is a song written by Marc Paelinck from Belgium and Martin King from the U.K..
Alyona is Belarus' 10th Eurovision entrant.

Solayoh is available at iTunes in original and karaoke versions.
If you just want to listen go here at BTRC

A remix EP has been released on iTunes and Amazon, see versions below.

Solayoh is not a new song, it has been on King and Paelincks MySpace for a few years already (as Soleo), but EBU have eased the rules about songs being published (some crap about not having any profit from the early publishing).
The composers have deleted the original song, but stated their account had been hacked.

Marc Paelinck also wrote the Belgian entry of 2002 (Sister by Sergio and the ladies and co-wrote the 2004 entry with his brother Dirk (1 Life by Xandee). 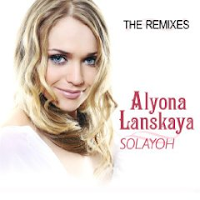 Alyona's Facebook had a competition to write Belorussian lyrics for Solayoh.

An early 1 track promo has been issued.
For Malmö a bunch of goodies were made. A a cdrom  with the six remixes and the English, Russian and instrumental versions of Solayoh. (wave and mp3 files). (2 different discs, but with the same content)
Beware: Fakes are being offered on e-bay
The promo pack also includes a usb card with the exact same files.
The Belorussion version doesn't seem to have materialized yet, even though there was a competition to write the lyrics.

Amazon offers two cdsingles for sale, but they are in fact cd-r's made by request.  Source is undisclosed, better burn one yourself and save some money.

Solayoh - The Album
Alyona Lanskaya's new album is out now (November), The album is titled Solayoh.
In Belarus the CD is in the shop. The disc also includes a videoclip of Solayoh. 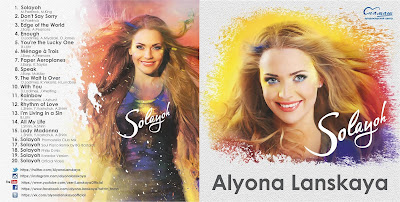 For the rest of the world (or at least some parts of it) the album is available at iTunes. There's 15 tracks plus four extra versions of Solayoh. (Marked * in versions list above)
You can listen to the tracks at Alyona's Soundcloud or at her Facebook (november 14 entry has a player).
All songs are in English. You'll also find Rhythm Of Love and 2012 contender All My Life.


Rhythm Of Love
Original National Final winner Rhythm Of Love is written by Leonid Shirin, Yuri Vashchuk and Alexey Shirin.
You can listen to the song here at BTRC or watch the official video here at Alyona's Youtube

Alyona Lanskaya already won the 2012 Eurofest selection with the song All My Life, but she got lost on the way to Baku only to find Litesound on the Eurovision stage.
(Read more about that here at the Baku Collection)

The Rhythm Of Love composers also have been unlucky in the past. They missed out with Alyona last year and they also wrote NF winner Far Away by 3+2 which was replaced by the song Butterflies they didn't write (2010). Now it's the third time thay are stabbed in the back, not very nice.
Update 2014: Composer Yuri Vashchuck won the 2014 Belarus selection (he's Teo). Let's see if it holds this time.

You can listen to the songs from the national final including Rhythm Of Love here at BTRC.

South African singer Colé van Dais teamed up with Gbenga Adenuga from Nigeria and recorded a coverversion in Afrikaans and Yoruba titled Molayo. It can be found on the 2018 album Colé and Friends. 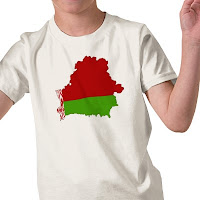 Links and sources:
BRTC Eurovision
Alyona Lanskaya at VK and FB
Lanskaya's Youtube channel.
Thanks to Lior
Belarus 2013 at ESCKAZ